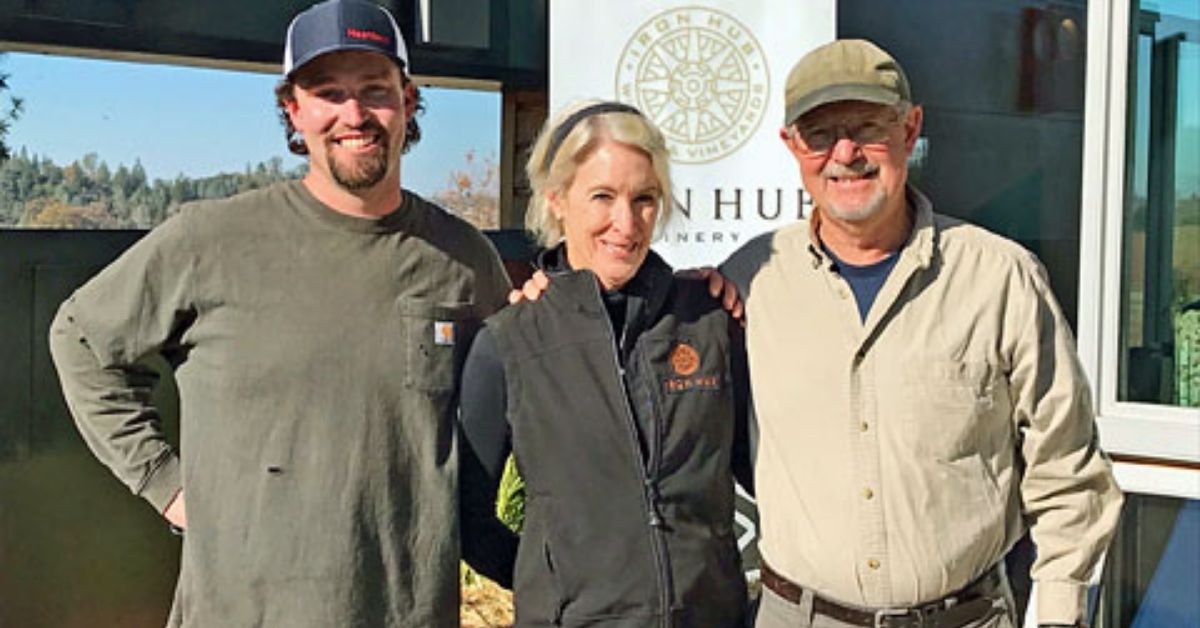 Our first winery appointment was at Iron Hub Winery, just off of Steiner Road in Shenandoah Valley. I’d visited this location in late 2013, when it was known as Amador Foothill Winery, but this was my first time back there since it became Iron Hub. Founded in 1980 by the husband-and-wife team of Ben Zeitman and Katie Quinn, Amador Foothill was one of the earlier modern-day wineries in Amador County. Ben and Katie sold their 33-acre property in 2014 to Tom and Beth Jones, who embarked on a major program of remaking the old facilities there as well as constructing new ones, including a new tasting room. As part of their work in building their own wine program and differentiating it from the old one, they established the Iron Hub label in 2016.

Tom Jones is the winemaker of Iron Hub, and he has a long history in Sierra Foothills winemaking. He earned a master’s degree in Enology & Viticulture from UC Davis and was the founding winemaker and part-owner of his family’s well-known El Dorado County winery, Lava Cap, in the mid-1980s. After about thirty years there, Tom, Beth, and their children made the move south to Amador County to establish Iron Hub. Tom’s son Spencer is following in his father’s footsteps and has also earned a master’s degree in Enology & Viticulture at Davis. While there are some other California wineries with father-son winemaking teams, one in which both have UC Davis master’s degrees is unique in Amador County. While working alongside Tom as assistant winemaker, Spencer also manages the property’s 16-acre estate vineyard and the two of them do the bulk of the farming work there. The name Iron Hub comes from Tom’s discovery in the Sierra of an old hand-forged iron wagon wheel hub, perhaps from Gold Rush days – the name reflects the family’s goal of fine craftsmanship in their wines as well as of making the winery a hub for guests to gather and enjoy wine and life.

Iron Hub’s 16-acre estate vineyard was established in 1979-1980, and further plantings have been made in the years since then. Ranging from about 1,600-1,800 feet in elevation with mostly deep decomposed granite soil, the hilly 16-acre vineyard site has slopes facing in various directions, and the plantings of their grape varieties take advantage of the different slopes and aspects. The vineyard includes Sauvignon Blanc, Sémillon, Syrah, Grenache, Sangiovese, Barbera, Aglianico, and Mourvèdre. It’s unusual for an Amador vineyard to not include Zinfandel, but Amador Foothill was able to source top-notch old-vine Zin nearby, particularly from 50-year old Clockspring Vineyard and 110-year old Esola Vineyard. Iron Hub continues to use fruit from these two sources, as well as from other local ones, for their Zinfandel.

After heading up the drive from Steiner Road, Carol and I parked by the new Iron Hub tasting room. This building is quite a change from the previous winery, whose tasting room was rather plain and utilitarian – the Iron Hub building is a striking modern building, designed by the same architect who designed the Andis facility not far away. The tasting room takes full advantage of the spectacular view, with windows looking out over the rolling hills of Amador wine country and far beyond. Carol and I were welcomed to the tasting room by Melinda, who led us out to the sizable patio for our tasting. There, the panoramic view was even more stunning, and we could easily spot the Sierra Nevada’s Crystal Range near Lake Tahoe, about 40 miles distant. In addition to their wines, Iron Hub also has cheese and charcuterie selections and other items available for visitors to enjoy during or after their tastings.

As Carol and I were enjoying our tasting of the Iron Hub wines, Tom and Spencer each came out to the patio to talk with us. They were both busy with the day’s tasks so they didn’t have a lot of time to spend with us, but we enjoyed talking with them. Spencer mentioned to us that the vines at the estate vineyard are well-established and generally require only minimal irrigation as their roots reach deep into the soil. They’re working to dry-farm more of the vines – currently about half of the vineyard is dry-farmed. He also said that they are adding Zinfandel and Petite Sirah to the estate vineyard as well as more Mourvèdre, and 2022 will probably be the first harvest of the Petite Sirah there. While Carol and I were out on the winery’s patio, we also saw Smokey and Marley, the winery’s two friendly dogs, as well as Simba, one of their feline team of gopher hunters – Melinda told us that they do a great job with that!

All of the fruit for the Iron Hub wines comes from their estate vineyard or is sourced from other vineyards within a few miles of there. While the Iron Hub wine line-up doesn’t look that different from that of the old Amador Foothill Winery – not surprising given the varieties planted at the estate vineyard and the continued sources for other fruit such as their old-vine Zin – the wines themselves now display the Jones family’s distinct work. None of the red wines are 100% varietal, for example, so the art of blending is of key importance, and Spencer noted how he’s been learning this from his father. Unlike many smaller wineries, Iron Hub has its own in-house bottling line. Current annual production is around 3,500-4,000 cases, nearly all of which is sold direct-to-consumer from the winery.

Melinda started off our tasting of the Iron Hub wines with the 2019 Estate Sauvignon Blanc, which was aged on the lees in neutral oak. Featuring fig and stone fruit aromas with a floral note and moderate acidity, the lees aging gave it a richer texture than many Sauvignon Blancs, quite nice. The 2019 Estate Rosé was next – made entirely from Barbera, the grapes were pressed after spending about 1.5 hours on the skins. With a light salmon color, this was a bit shy on the nose but had good acidity and a pleasant finish.

We moved on to reds, and of course no Amador wine tasting would be complete without Zinfandel! Melinda poured us the 2017 “Cross Creek” Zinfandel, so named because the two vineyards that the wine is sourced from are across a creek from the estate property. One of these sites is actually in southern El Dorado County, as the county line is not far away. Lighter color for a Zin, this featured raspberry, spice, and a vanilla note, medium-bodied with moderate tannins. We followed this with the 2018 Esola Vineyard Zinfandel, which both Carol and I thought was a real standout. The fruit had more of a boysenberry profile and the wine had a distinct brambly character along with touches of earth and spice, with more acidity, texture, and tannin than the first Zin – really a classic Amador Zinfandel. The “Cross Creek” bottling seems ready for immediate drinking, while the Esola Zin should reward time in the cellar though it’s certainly delicious now. Melinda told us that there is a small amount of Sangiovese blended with both of the Zinfandels that we tasted.

We finished our tasting with the 2018 Petite Sirah. This had ripe and bold dark berry fruit aromas along with vanilla, spice, and a slight floral note, medium-full body and grippier tannic finish. The Petite Sirah was blended with 12% each Grenache and Barbera, so it’s not as dense a wine as this variety sometimes can be. Iron Hub produces quite a few different wines, and other current releases that we didn’t taste on this visit include Sémillon, Chardonnay, Grenache, Sangiovese, Barbera, Clockspring Vineyard Zinfandel, Old-vine Zinfandel, Syrah, a red blend called “Resolute”, and a Port-style wine called “Sojourn”.

I greatly enjoyed our visit to Iron Hub. Melinda was friendly and knowledgeable, and she didn’t rush us at all on our tasting so we were really able to enjoy the wines and the relaxed atmosphere. It was a pleasure to meet Tom, Beth, and Spencer, and to talk for a bit with Tom and Spencer. Overall, I felt that the Iron Hub wines are true to the Amador style of bolder fruit but they display more refinement and balance than many from the region. My favorites of the wines we tasted were the 2019 Estate Sauvignon Blanc, 2018 Esola Vineyard Zinfandel, and 2018 Petite Sirah, with the Esola Zin being a particular standout. It was interesting to see how Iron Hub has continued the legacy of Amador Foothill Winery in some respects but has definitely put their own stamp on it, from the beautiful new tasting room to changes in the farming and winemaking that reflect the Jones family’s own vision. This is certainly a worthwhile stop when you’re visiting the Shenandoah Valley wine region of Amador County.

After we finished our tasting at Iron Hub, I retrieved our sandwiches from the car and we enjoyed the spectacular view from the winery’s patio along with our lunch. The sandwiches we’d picked up from Amador Vintage Market were delicious – I had the Amador Turkey Cobb and Carol had the Zesty Veggie Panini. We had a relaxing time there but eventually had to walk back to the car for the drive to our next winery appointment, not too far away in southern El Dorado County. As we headed along the road, Carol said that she thought it was remarkable that I could navigate from place to place without using a map or GPS in the car. I told her that I’d been to the area many times before so I knew most of the roads pretty well (and I’d checked out the routes on a map prior to the trip) so I didn’t have any difficulty getting to where we were going. Besides, I’d had a few “interesting” experiences as a passenger where the driver trusted their GPS, so I figured I was better off without it!