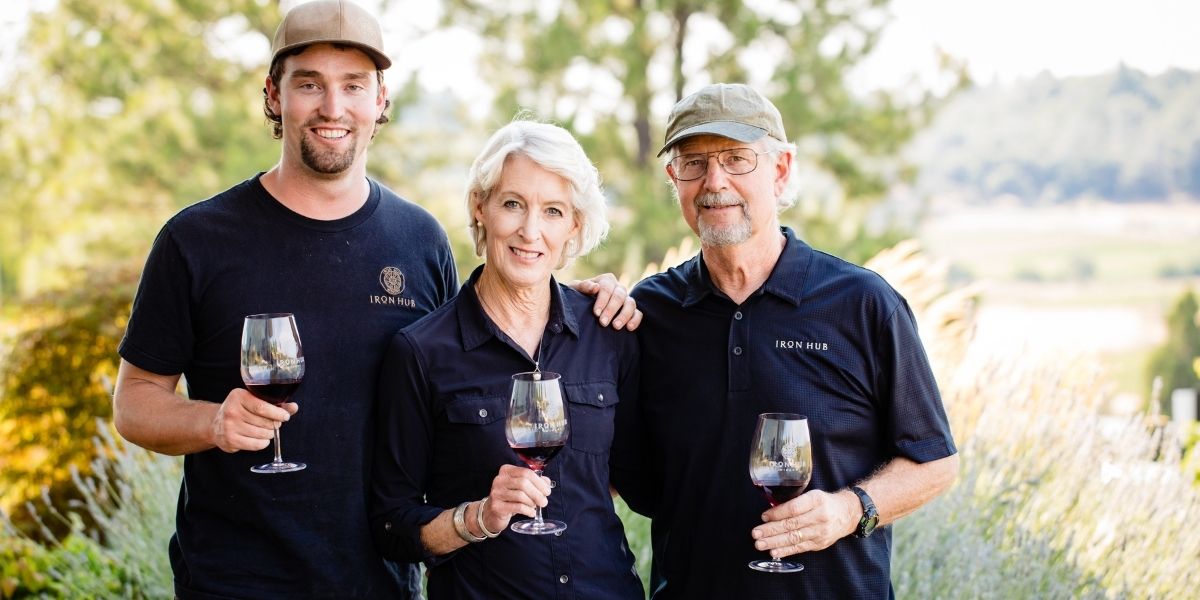 California’s Sierra Foothills Remain a Land of Opportunity for Winemakers

The Sierra Foothills AVA is thriving. Here’s how longtime winemakers and residents work to keep it true to its roots.

When sommelier Guy Tucker moved to the Sierra Foothills, a vast region in the northeastern part of California where the Sierra Nevadas peter out into the Central Valley, it wasn’t because of wine. In 2016, Tucker and his wife were empty-nesters, and the time had come for something new, he says. They were drawn to the area by the rolling hills and titanic expanses of open land unfolding into the horizon — plus the cost of living was lower than in the Bay Area, where they’d been living since 1999.

It was only after they settled into their home that they began exploring some of the hundred-odd wineries throughout the region. Tucker remembers setting out on alpine hikes and stumbling across small wine operations. He’d often be the only person tasting his way through samples of zinfandels and barberas for hours at a time. The relative solitude made each one feel like a true discovery, he says. “As we were exploring around, we started seeing these amazing vineyards tucked into little nooks and crannies in the hills and surrounded by towering pines,” he says. “This piqued our curiosity, and we started trying some of the wine.”

These days, however, the Sierra Foothills have lost some of that charm, Tucker says. Since he moved to Somerset in El Dorado County just six years ago, there’s been an explosion of attention focused on the Sierra Foothills as a wine destination; according to the Amador Vintner Association, per vineyard acre, more award-winning wines come from Amador County than any other region in the United States. But as interest in the Sierra Foothills has grown, so have tensions in the region as bigger wineries — including some with deep roots in northern California’s more commercial wine regions like Napa and Sonoma — begin to move in. Turley Wine Cellars moved to Plymouth in 2001, then Rombauer expanded with a new tasting room in the same Sierra Foothills city in 2019. COVID slowed some of the momentum, but didn’t stop it, Tucker says.

There’s a number of reasons why winemakers might set their sights on the Sierra Foothills, he says. It could be the higher cost of development in Sonoma and Napa or the (relatively) more fire-resistant nature of the mountainous area. But it could also be what he’s known for years: that in the Sierra Foothills, there’s more opportunity to experiment and reach new heights in winemaking. “The new generation understands what you can do with this region,” Tucker says. “They’re open to more than just cabernet sauvignon.”

In 1848, the Gold Rush brought thousands of southern Europeans to northern California’s foothills, all hoping to strike it rich off the land, which is the ancestral home of both the Sierra Miwok and Nisenan. Today the 2.6 million acres that comprise the Sierra Foothills American Viticultural Area are known for rocky terroirs, sunny days, and cold nights due to alpine winds that cascade down the mountains. It’s one of the biggest wine regions in the United States and runs from Yuba County in the north to Mariposa County in the south.

Early Italian settlers arriving in the late 19th century noticed the environment felt a lot like home, and planted the region’s first Old World grapes including the oldest zinfandel grapes in the United States, plus tempranillo and syrah. Barbera, a slightly more obscure varietal, is gaining popularity and has always grown well in the area, too. By 1920, the area, then known as “the Mother Lode,” hosted more than 100 winemakers; today there are more than 40 wineries in Amador County alone, the majority being boutique and family-owned.

In terms of what makes the region unique for winemakers, the geography is the first and main difference between Napa and the Sierra Foothills, Tucker says. The region isn’t centralized or dense, which also makes it more cumbersome to visit in one day. He points out, too, that quality of the wine produced in the Sierra Foothills runs the gamut from excellent to acceptable; with less pressure to perform, vintners in the region end up experimenting — producing successes and, at times, failures. “In Napa you can point and you’ll find good wine,” Tucker says. “Not so in the foothills. You gotta know where to go.” That’s why Tucker started Foothills Wino, an online guide to taking the foothills’ terroir to task.

But the grapes also make the Sierra Foothills a worthy destination. While Napa is historically known for its rich, buttery chardonnays and big, bold cabernet sauvignons, the many microclimates and soil types in the Sierra Nevadas mean plenty of grapes grow there, and in myriad ways. High elevation tends to bring greater acidity; while Napa goes up to about 2,000 or 2,200 feet, and the foothills can hit 3,400 to 3,500 feet of elevation. But that range also means what works well in El Dorado County doesn’t always translate to Amador. Tucker says that’s a strength, but also can hurt the marketability of the area — it’s not as easy to describe.

Margaret Schroeder, the executive director of the Amador Vintners Association, says the area’s water usage is also better suited to weather the historic California drought and the impacts of climate change on the global food system. “Over 30 percent of the vines are dry farmed, so city water isn’t needed,” Schroeder says. “We’re ahead of the game when it comes to climate change. We have old, heat-tolerant vines.” Schroeder may be new to the foothills — she took up her new role at the beginning of 2022 — but she already pushes back on the idea the region would lose its small town charm in favor of the ultra luxe energy of its neighboring wine regions to the west. “We were here before Napa,” Schroeder says. “I consider us to be that trailblazing wine region. We don’t want to be anything like Napa.”“The region is like Napa used to be 40 years ago. It doesn’t have all the glitz and the hype. It’s just people making a living making wine.”

Tom Jones (not that Tom Jones) started his career in wine in 1983 in El Dorado County, on the south end of the Sierra Foothills appellation. He says the growth in the county, and the entire area, has been phenomenal. In the last 10 years, Amador County specifically has gained momentum, he says, as a lot of the fruit grown in the area is now also being produced there – as opposed to being shipped out and turned into wine elsewhere. “The region is like Napa used to be 40 years ago,” Tom says. “It doesn’t have all the glitz and the hype. It’s just people making a living making wine.”

Now he, his wife Beth, and his son Spencer run Iron Hub Winery. Like his father, Spencer earned a master of science in enology and viticulture from UC Davis, making them one of the few father-son duos in the region with a shared educational pedigree. Spencer agrees with his dad: Development is ramping up in the community in a more aggressive way. “The development of Sacramento and Folsom, and the high prices of Napa, are sending a lot of folks to the foothills,” Spencer says.

Preserving homes and heritage over development is a key issue in Amador County, Beth says. She adds that zoning pressures, including a push to break land parcels into smaller and smaller lots, is an ongoing concern at supervisory meetings in Plymouth, the town where Iron Hub Winery is located. At meetings, residents from the wider Plymouth community express frustration that homes they’ve owned for decades, or generations, suddenly get a massive wine operation as a neighbor. “There’s no doubt there’s development pressure in this valley,” Spencer says. “There’s definitely a fight to preserve our heritage here. We want the quiet nights, the dark skies, to save our olive trees.”

Bob Knebel, the president of Rombauer, says the foothills have always been a home-away-from-home for the Napa-based winery. The major label’s wines, like their jammy zinfandels and oaky chardonnays, are as successful as a California wine gets, found on both restaurant wine lists across the state and Safeway shelves. But Knebel says Rombauer’s personality is as down-home as the foothills. The company was founded in 1980, and since much of the company’s zinfandel grapes already came from the foothills, setting up shop in El Dorado made sense. So when they outgrew the Napa production facility just over three years ago, the company moved in.

Knebel sees a number of reasons why the region has stayed under the radar while gaining attention in certain circles. Reno and Tahoe wine lovers, for example, have started coming to the Rombauer tasting room in Plymouth, he says. “I know people want to maintain their approachable culture, and not feel that we or anybody are significantly changing the region,” Knebel says. “I noticed that when we went over three years ago there was a sense of excitement and a sense of concern.”

He feels the leaders who will bring the foothills into its next chapter will need strategy, thoughtfulness, and vision — because change is inevitable. “Leadership needs to look forward: Things will change, that’s just a fact of life and our economy,” he says.

Staton Whaley came to California right after college in 2020 for a job at E&J Gallo Winery, the biggest wine supplier in the country. He took up a side gig at Tofino Wines on Geary and Masonic boulevards to get further involved in the Bay Area wine industry. Later, he created a list of wine regions to hit in the state, he says, but admits neither of his jobs drew his attention to the Sierra Foothills.

Mendocino and Paso Robles have some attention, but the foothills is even further under the radar than the other non-Napa appellations, Whaley says. “There is a ton of room to grow, literally and figuratively — which might speak more to Napa’s limitations rather than anything against the foothills,” he says. Companies like E&J Gallo tend to look for big expanses of land to mass produce inexpensive blends. Whaley thinks any locals who feel anxiety about disappearing land in the region could be reacting to that trend as it unfolds in the foothills. “If I had to guess, you can dive into some really interesting small lot stuff in the foothills for a great price,” Whaley says.

The foothills are still a land of opportunity, but also an area determined to hang onto heritage. Rombauer is getting interested in barbera, the same grape the Jones at Iron Hub have been farming for years and one the region has held onto as part of what makes it unique. “That’s a relatively undiscovered grape in California thus far, but we’re excited about it,” Knebel says.

At the Amador Four Fires Festival, which took place on May 7 at the Amador County Fair & Event Center, more than 30 wineries from Amador County poured wines, but there was not even one glass of chardonnay or pinot noir — a small way the region asserts its independence from the Napa and Sonoma staples. Instead, guests drank less common California varietals that have long been foothill favorites, including tempranillo, syrah, and vermentino. Schroeder, who helped coordinate the event, says she’s focused on the region’s growth and promoting local wineries and winemakers, though she does notice some of the tension around development. “We want to grow, but at our own pace,” Schroeder says. “We don’t want to attract hordes of people and have that Disneyland feeling.”

Tucker says he’s happy to have the foothills stay as they are. “It’s trying to be a destination place,” Tucker says. “But the foothills are not likely to turn into Napa in what we think of as Napa. It’s completely unique.”